ARGUABLE THE BEST WRESTLER IN THE WORLD AT THIS TIME 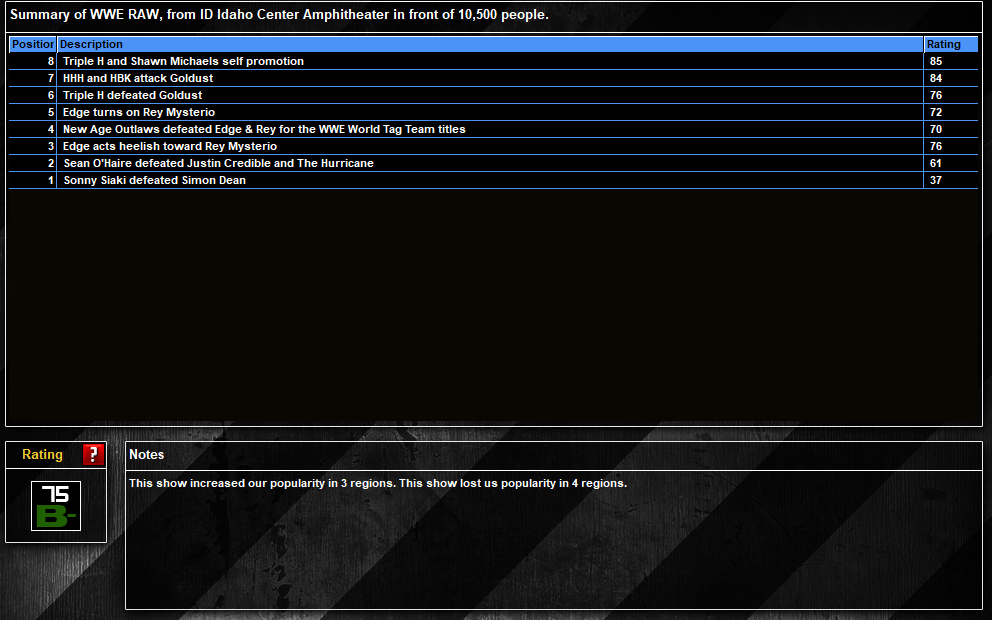 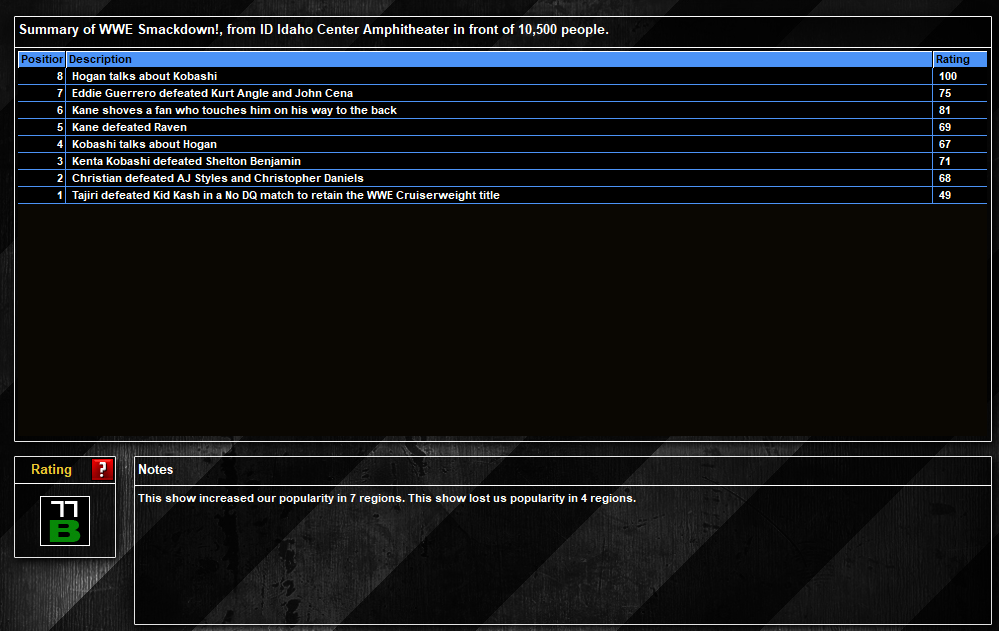 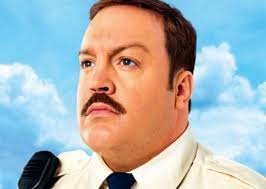 The crowd took well to the end of the show with that promo. It was pretty good. I know Kenta wasn't a NJPW Guy, but I had to take the chance to do this. The show was only in Japan. I'll do these specials every so often. 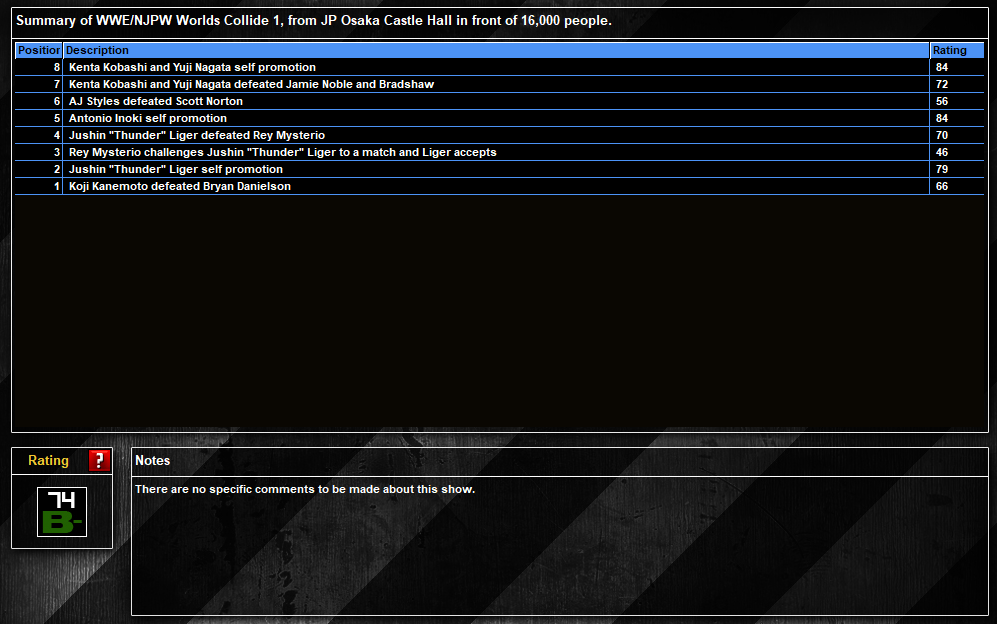 Imma be honest. I don't know who from NJPW at this time I should bring in. It's just I have a deal with NJPW and I wanted to do this show lol. If you or anyone knows people from 2003 NJPW I should maybe bring in with the deal, let me know. 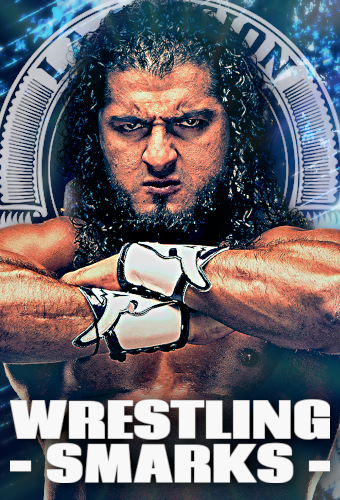 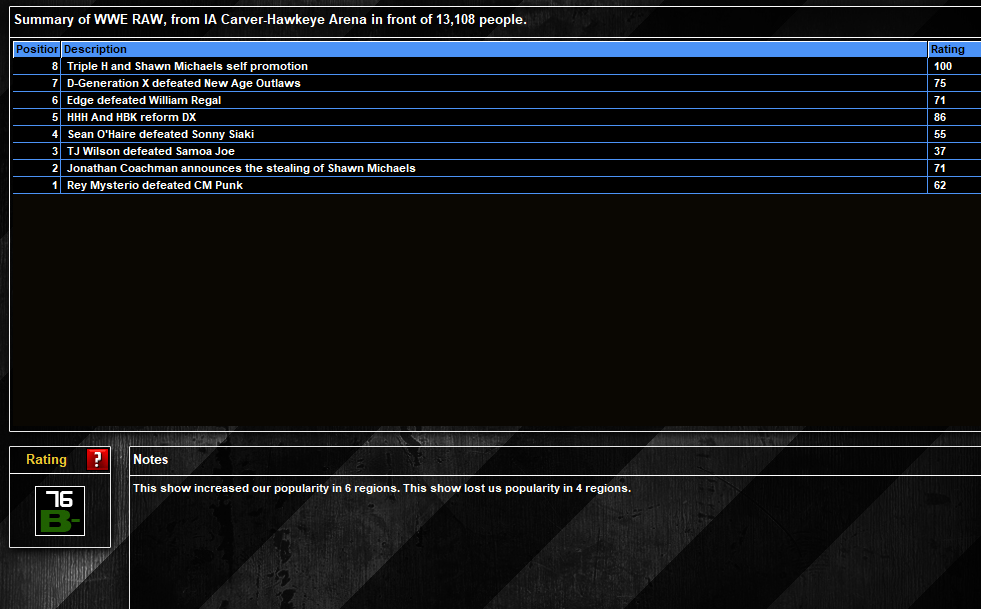 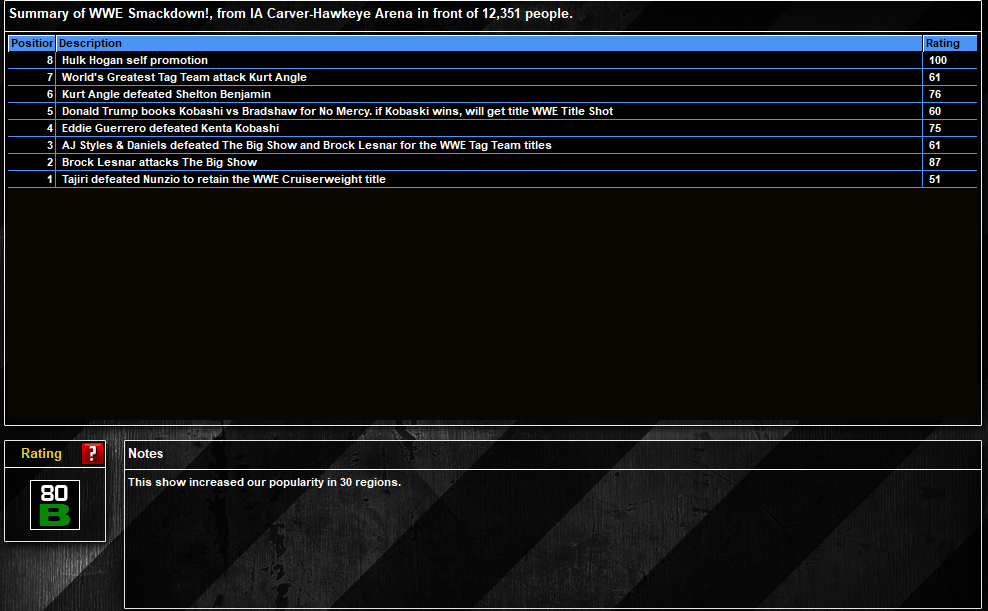 Smackdown showing why it's the A show.

I'm doing current Impact in TEW now. I did everything the same up to Hard To Kill. Problem I ran into though was that the Impact World Title was set to be male only. So I had Tessa beat Sami, only for it to then tell me that she wasn't eligible to win the belt.

So I figured I could build it into the story that the match wasn't the title... but since she beat Sami, management was forced to giver her a shot for the title. I edited the belt to make it not be gender-exclusive and had Tessa win the title on Impact. Not exactly what I wanted but I did what I had to do.

I also had Jordynne beat Taya for the belt at Hard to Kill, but other than that those PPV results were the exact same.

Also, Swann never got injured because I started at the beginning of January.

Here are the three weeks of Impact post-Hard To Kill. 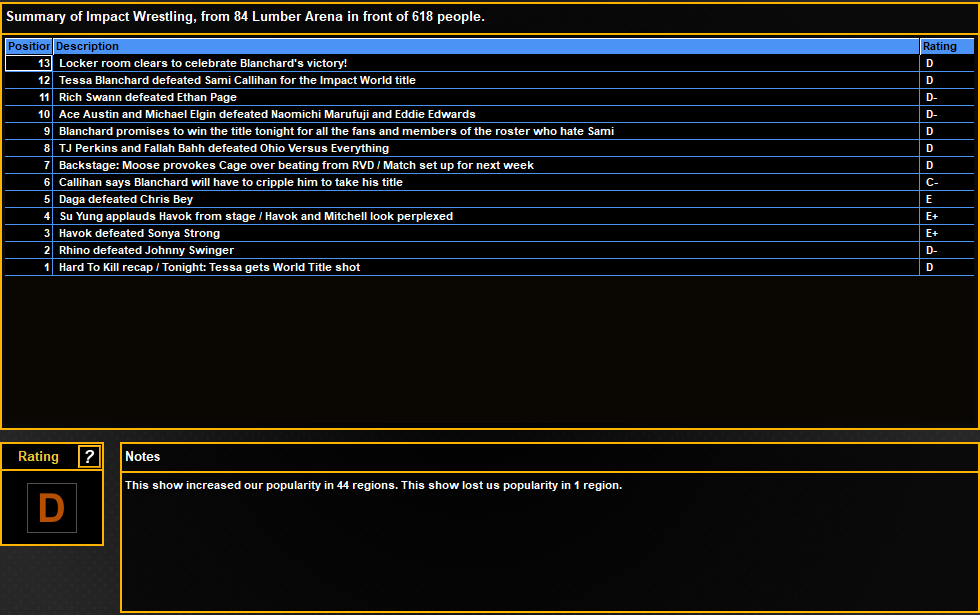 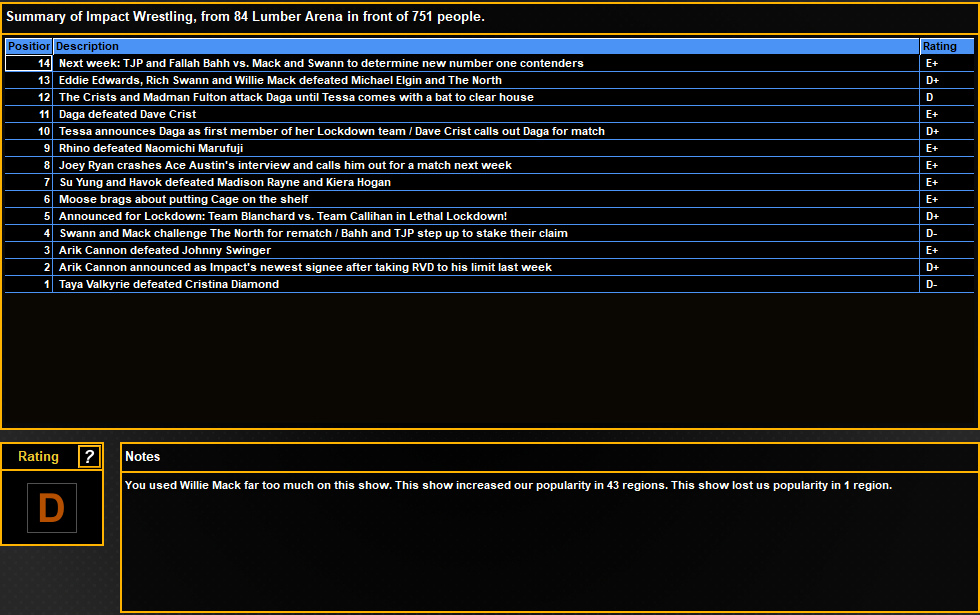 Rob Van Dam is giving me some trouble, because he's always high. Which, honestly, shouldn't be an issue. We're a Canadian company and I think it's kind of known that Impact doesn't give a fuck if their wrestlers smoke weed. So I'm kind of trying to work things out with him to get him to chill out. But he also sprained his MCL so he's out for a couple of weeks too. Rough start for him.

Here's another nice little tidbit to come out of this save, going down at the Rumble. 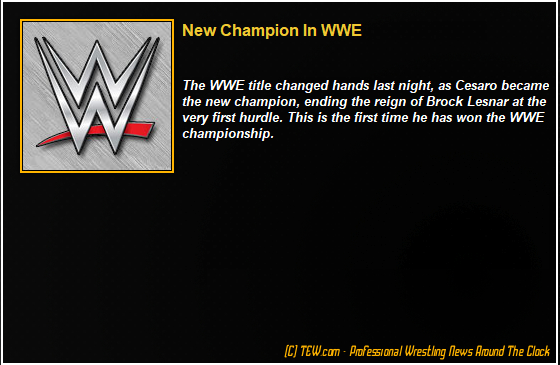 Things are already off to an interesting start in this world. 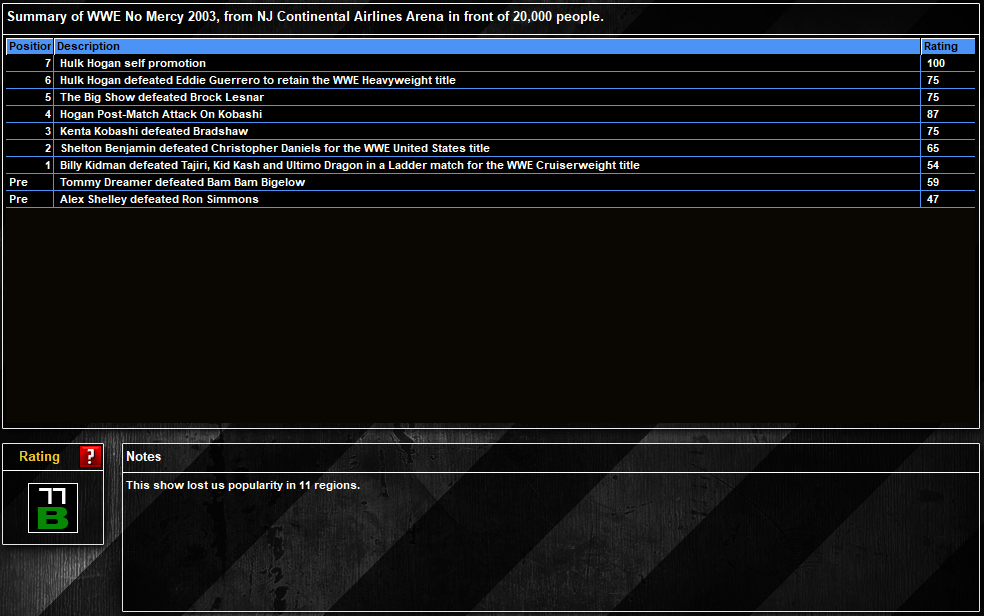 Seems like a short PPV. Or are your segments just hella long?

Hoss Delgado said:
Seems like a short PPV. Or are your segments just hella long?
Click to expand...

Long matches and stuff some of them are. Would've been longer also, but Daniels held two titles, so I had to get one off of him so I can do both titles next time.

Plus this is only one brand anyway. Next PPV is about to be big, as it's Survivor Series.

So get ready for a lot of team action soon.


edit: also I want to say, I hate whoever made this damn file. They set everyone's max weight and min weight to what theirs is, so I can't try and have someone lose weight. So anyone I want to at least ask, I'm gonna have to go in and change that.

WWE fell to Cult size, and the next day... 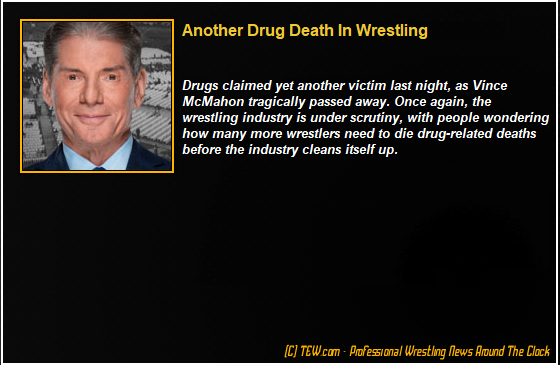 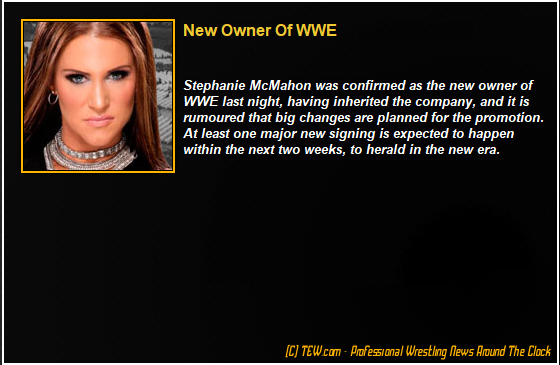