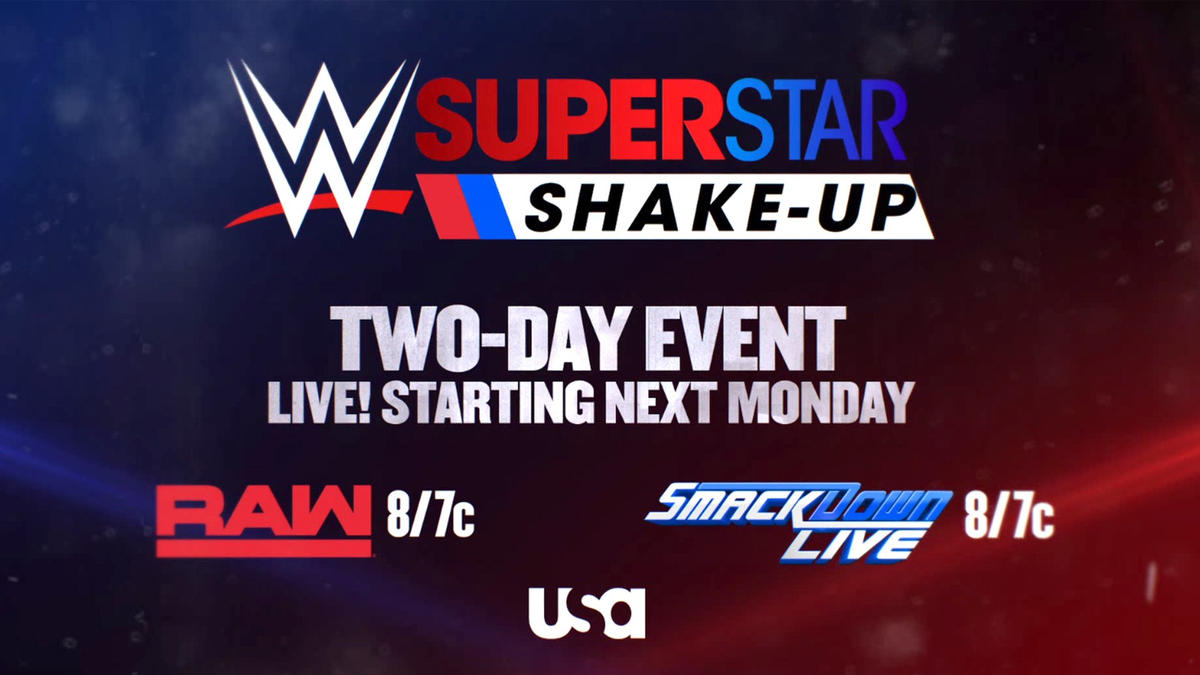 A special two-night event changes the landscape of both Raw and SmackDown next week, live on USA Network.

The first-ever international WWE Superstar Shake-up begins Monday night as Raw emanates from Montreal, Canada. With new champions crowned at WrestleMania and so many up-and-coming Superstars – including the bold Lacey Evans and the hulking Lars Sullivan – looking to stand out in the crowd, just about anything can happen this week on Raw and SmackDown LIVE.

Will Raw’s champions bring their titles to Team Blue? What rivalries will begin as Superstars come into conflict with new adversaries? Whatever happens during this epic two-night event, you won’t want to miss it.

​
What are your thoughts on this year's shakeup? Has it lost its flavor with the current nonexistent split enforcement?

Also, where do you expect everyone to go and where do you wish certain people would go? Thoughts on possible NXT call-ups?

Still ain't as bad as when they did one in like 2012 or so when they already had Raw Supershows as a thing and everyone was appearing on both shows weekly, that shit made no sense.

I expect the guys who were on Smackdown last week like Braun and Drew to end up over there. Think the shows will also be pretty fun even if the shakeup stuff ends up being lackluster just bc the brand switch debuts and such always get some good pops regardless. 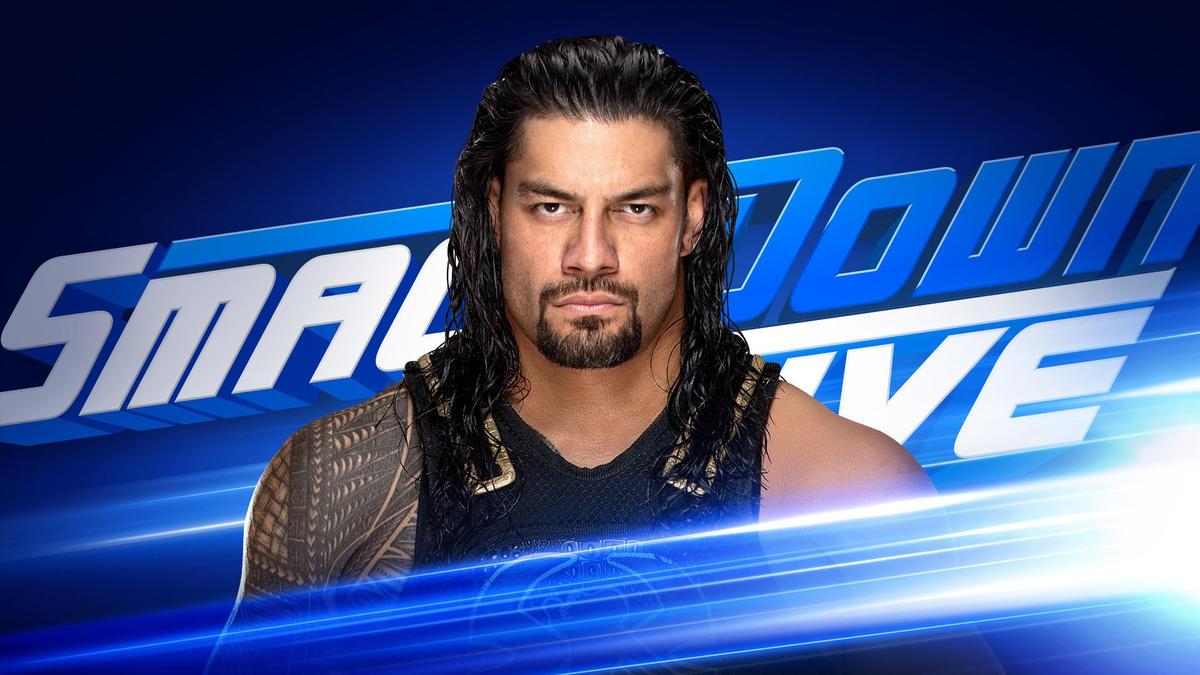 It’s time to shake things up! The Superstar Shake-up goes international this year, as Raw and SmackDown LIVE emanate from Montreal and prepare for dramatic changes to their rosters.

Which Superstars might switch brands? What possibilities would these jumps create? WWE.com’s editors got together and made 5 picks as to who they’d like to see switch brands in this year’s Superstar Shake-up. Do you agree? Let us know in the comments!
Click to expand... 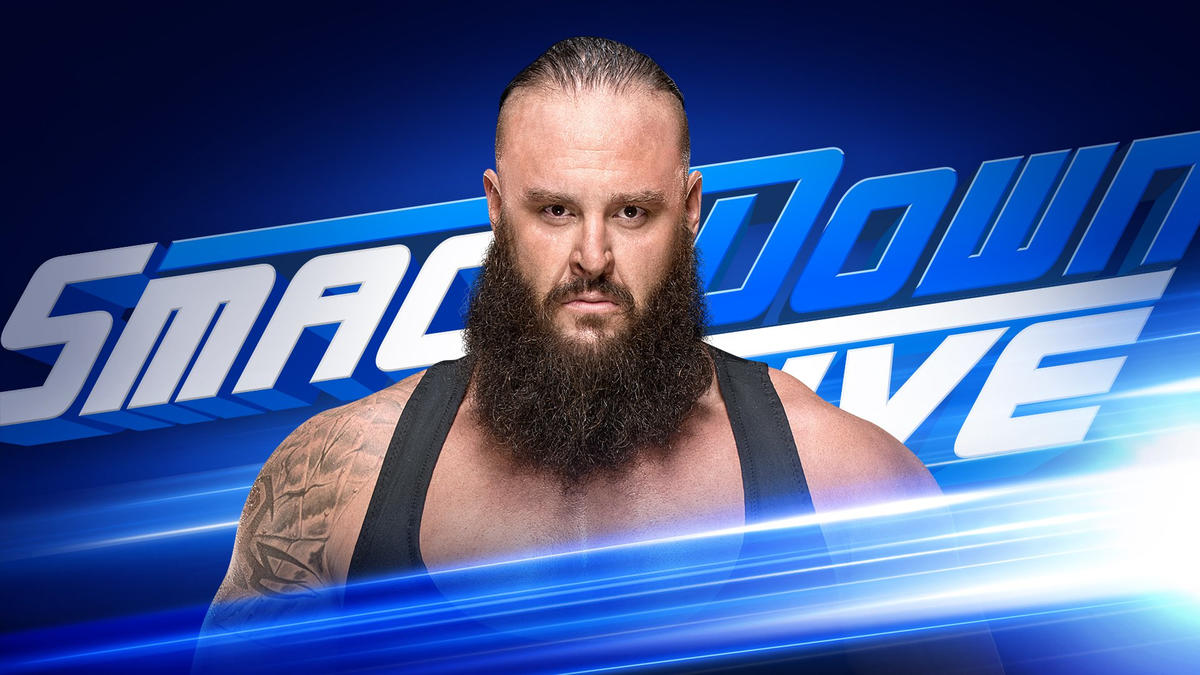 As Braun Strowman demonstrated when he arrived on SmackDown LIVE to brawl with Samoa Joe, he doesn’t really care what brand he’s on, as long as there’s someone waiting to get these hands.

But, after prowling the jungle that is Monday Night Raw for nearly three years, a change of scenery might do The Monster Among Men a world of good. A move to the blue brand could reinvigorate Strowman’s thirst for competition with a fresh field of Superstars to crush. How would he fare against the high-flying AJ Styles? Could he handle the relentless onslaught of Daniel Bryan? There’s only one way to find out… —BOBBY MELOK
Click to expand... 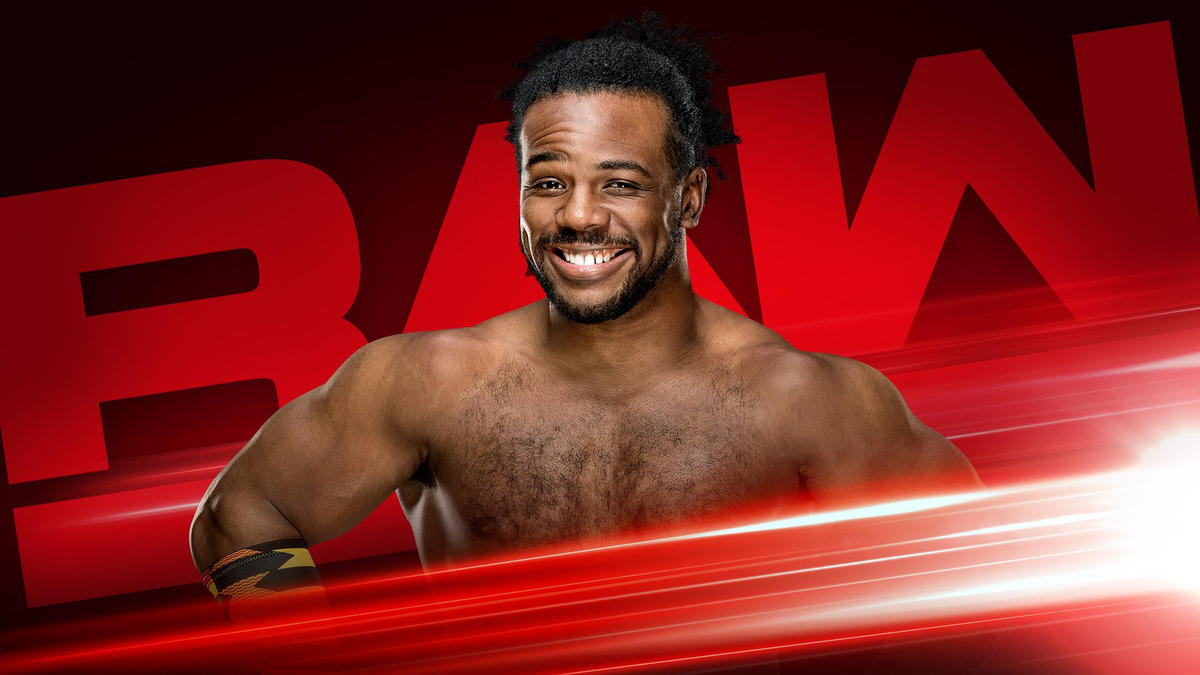 Don’t you dare be sour, but if The New Day had to be separated in the Superstar Shake-up – not that it’s something we’d ever want to see under normal circumstances – we think Xavier Woods would shine on his own on Monday Night Raw. His varied musical talents would help stave off Elias’ persistent, self-aggrandizing performances, and we’d get to see the five-time Tag Team Champion shine in singles competition for the first time, truly, since the 2014 formation of The New Day.

Outside the ring, Woods would bring his UpUpDownDown YouTube channel to Team Red as well, and we would get to see an entirely new assortment of Superstars lock up in the digital space, compete for the new UpUpDownDown Championship and “Keep. It. Tight.” —JAMES WORTMAN
Click to expand... 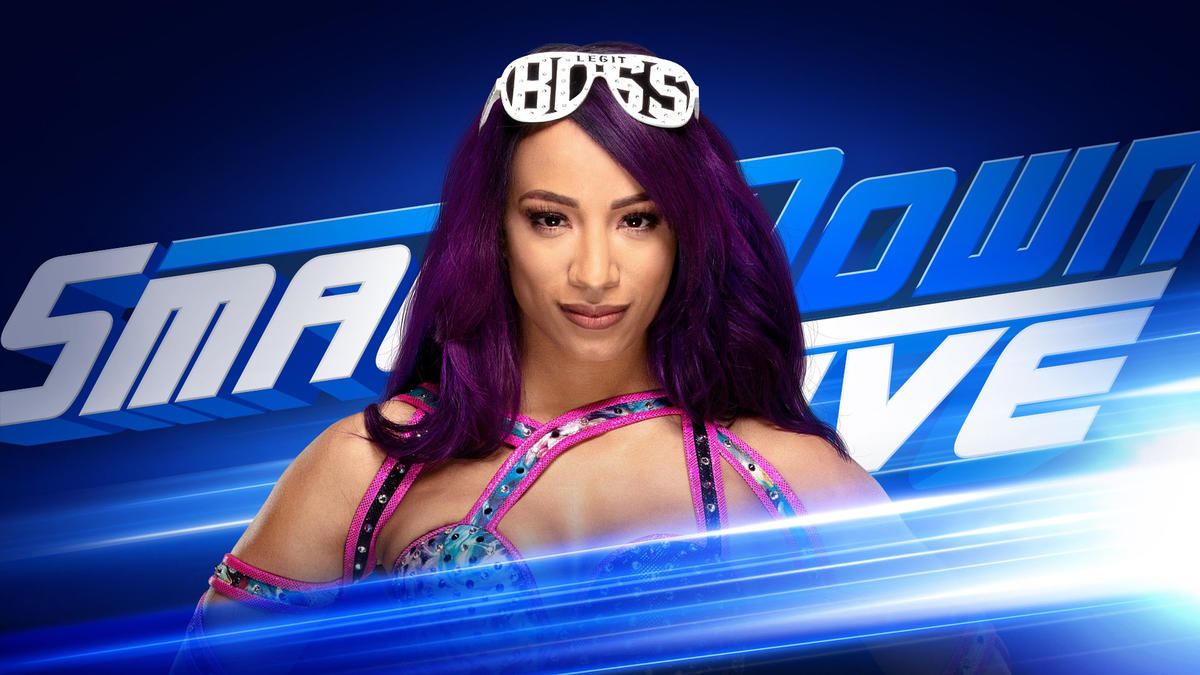 Sasha Banks is a four-time Raw Women’s Champion, but those reigns only average 20 days. Frankly, she needs a fresh start. Why not venture over to SmackDown LIVE — a brand she’s always loved. The Boss grew up rooting for SmackDown mainstays like Eddie Guerrero, Kurt Angle and Rey Mysterio. Plus, before the 2016 WWE Brand Extension Draft, she basically said she wanted to compete on the blue brand.

Sasha has made it clear that she’s focused on building up the Women’s Tag Team division alongside Bayley right now, but a move to Tuesday nights doesn’t mean Bayley can’t join her. Whether it’s The Boss ’N’ Hug Connection or just The Boss, Sasha could live out her dream and become an all-time SmackDown great. – JEFF LABOON
Click to expand...

The Undisputed ERA to Raw 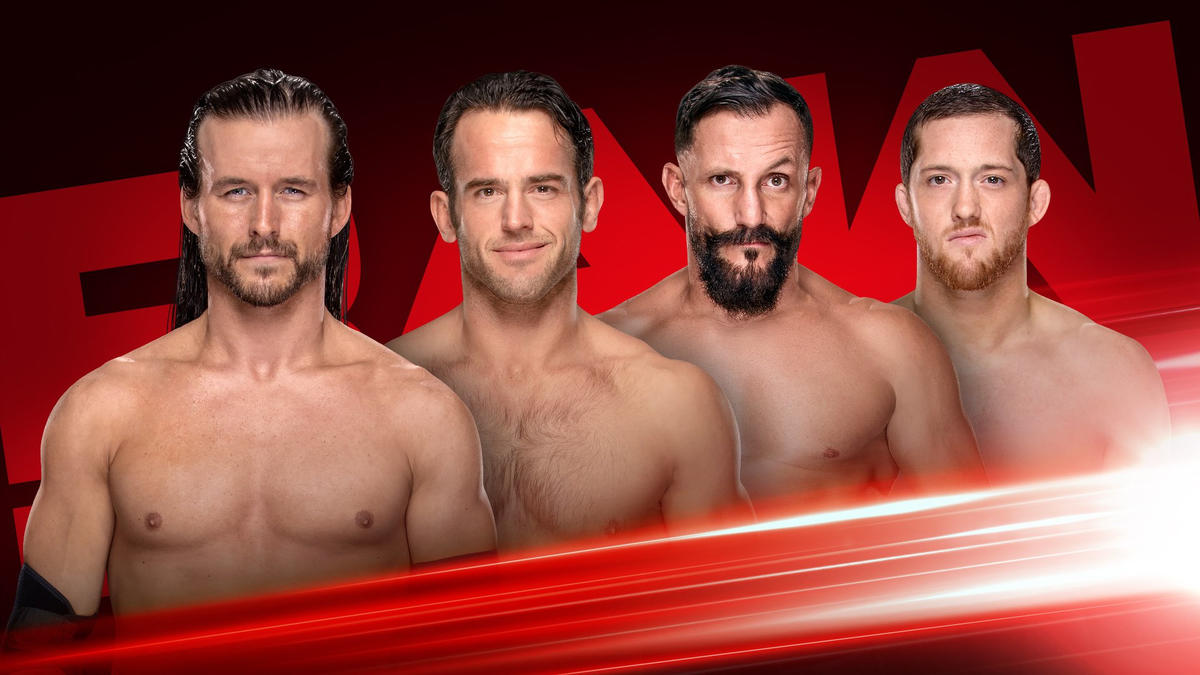 How’s this for a shock to the system: After running amuck on NXT for almost two years, The Undisputed ERA pulls the rug from under the red brand with a statement-making debut as part of the Superstar Shake-up.

Frankly, no example illustrates this potential shift better than their strong-arm debut at NXT TakeOver: Brooklyn III, when Adam Cole (“BAY BAY!”) hoisted the NXT Title moments after Kyle O’Reilly & Bobby Fish made a beeline for the NXT Tag Team Titles. With Roderick Strong joining the foray a few months later, it not only strengthened their numbers game but also the collective threat they pose to any locker room. Like sharks encircling prey, Undisputed ERA have conquered and devoured almost everything in their path on the black-and-gold brand. A move to Raw would provide these outlaws fresh fish and a new environment to expand their dominance. And that right there is Undisputed. – RALPH BRISTOUT
Click to expand...

Okay, so this is a hot take. Roman Reigns, after all, has been one of one of Raw’s lynchpins even prior to the 2016 Brand Extension, and it’s tough to imagine taking him away from the Universal Title he never lost. But The Big Dog’s return from his leukemia battle has opened the door for a full-fledged reboot of his in-ring career – why not take advantage? Move him away from Monday nights, where he’s run the roost and beaten everyone there is to beat, and send him to SmackDown LIVE to see how he fares against ready-to-pop new talent (Andrade), old rivals who have reached their final form (AJ Styles, Daniel Bryan), or even veteran Superstars who have finally tasted glory (Kofi Kingston). He’s made his mark on Raw already, perhaps it’s time to seek out new yards to conquer. – ANTHONY BENIGNO
Click to expand...

Take a look at this suggestions from the WWE.com contributors. Agree or disagree? I can fuck with some of these.

I'd like just about all of them and kinda expect a few, think UE would be a better fit on SmackDown though

I'd like to see Finn go to SmackDown and take the AJ kind of role after being rebuilt.

Sasha to SmackDown, Ruby split from the other two.

Even Bayley calling out the meaning of the current day split and shakeup.

I honestly miss the draft format more. Was more entertaining to watch rather than just guys randomly going to another show. But anyways here are some of my predictions.

PHX said:
I honestly miss the draft format more. Was more entertaining to watch rather than just guys randomly going to another show. But anyways here are some of my predictions.
Click to expand...

Nah I actually think this format is cooler, at least better than when you had to win matches for your brand to get a pick, felt hokey. My favorite way they did it was when it was still kayfabe random picks but the guys just kinds showed up in '05 except I didn't like that it was spread out over a few weeks, the '04 way was fine too where the GMs actually drew the names but I think this way is okay too, I just wish it was "random" instead of them agreeing on who goes where like trades. With the McMahons being the on-screen authority figures now I guess it's the most realistic it's ever been though bc they just pick who goes to each show on and off screen

I’ll always prefer the draft where the managers actually pick their picks. But, I guess you can only do that when you first start the rosters.

Chris said:
Nah I actually think this format is cooler, at least better than when you had to win matches for your brand to get a pick, felt hokey. My favorite way they did it was when it was still kayfabe random picks but the guys just kinds showed up in '05 except I didn't like that it was spread out over a few weeks, the '04 way was fine too where the GMs actually drew the names but I think this way is okay too, I just wish it was "random" instead of them agreeing on who goes where like trades. With the McMahons being the on-screen authority figures now I guess it's the most realistic it's ever been though bc they just pick who goes to each show on and off screen

Yeah by the draft I meant like what @Becky Two-Belts said the gm draft format not the win matches to get draft picks. The worst format was the one where it was spread out over a few weeks I always thought that was stupid and kind of forgot about it until now 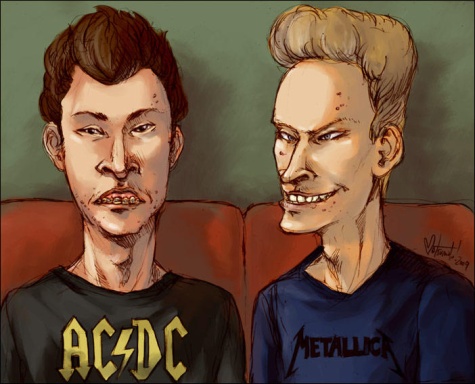 PHX said:
I honestly miss the draft format more. Was more entertaining to watch rather than just guys randomly going to another show. But anyways here are some of my predictions.

I like the draft better than the Shake up. Anyway, I hope Strowman goes to Smackdown and finally gets a run as champion. I wanna see Joe and the US title stay on SD, but at the same time I want Finn to go to SD. I would like to see the Usos go to RAW and team with Roman.

According to WWE.com, here's the full list of superstars RAW got in the shakeup:

Also according to the Smackdown preview, Vince is going to bringing in the biggest signing ever to SmackDown Live or something, gotta be Roman.

I was already assuming Roman Reigns was going to go to SmackDown to make up for the balance, but if he's hyping it like this I think it has to be Brock Lesnar. It could be Roman Reigns, but man fans will not be happy that he's once again treating Roman like he's a bigger deal than Cena, Batista or Triple H when they moved brands. Brock Lesnar is like the one guy WWE fans would assume would never move off Raw or the Universal Title picture. That would be shocking.

Just look at that talented AF roster change. Thoughts on how much that will affect Raw and who are you looking forward to most?

Chris said:
Can you imagine Brock coming to SmackDown and then wrecking Kofi in like two minutes and doing the same shit with the WWE title that he did with the Universal

Imagine if they got both of them? I can picture Fox demanding they get Brock Lesnar and Roman Reigns. As much as it would hurt to lose them, they stacked up Raw so nicely last night it would be a nice balance. Especially since Brock never wrestled on Raw and made sporadic appearances. Roman would be the week-to-week draw for Fox's blue brand. I think it might be mire likely that Roman moves over and Kofi immediately challenges him to knock the biggest dog down to establish himself and loses in a valiant effort. I never thought Kofi's reign would be long.
You must log in or register to reply here.
Share:
Facebook Twitter Reddit Pinterest Tumblr WhatsApp Email Link